Since it was my birthday, and due to the lack of presents, I found it to be quite normal that I got a present for myself. A quick visit to my computer supplier, delivered me this thing of beauty: a water-cooled ATI Radeon X1950XT from MSI.

It was a bit necessary for me to upgrade the videocard. Although my old X850 was pretty fast, it missed a few things. Since I'm a huge fan of TES4 Oblivion, I thought it would be nice to spend a little to get more out of the game, especially because Oblivion is already a pretty heavy game to run. As it was with my X850, I missed out on HDR, which seriously improves the in-game looks. And of course, 256MB VRAM was a bit tight; the game would often run out of VRAM, causing the FPS to drop. 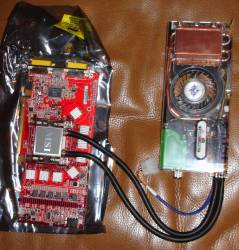 Installing the thing was not a picknick (see the gallery). Technically, the case is big enough, but there are already a number of other cards in there, making it a bit more difficult to get things to fit in. And as if that wasn't enough, the Antec wind tunnel made it all even more tight.

After reorganisating the cards a bit, I managed to get it fitting. Unfortunately, it's not the best solution, as the cool element is fit between my soundcard (Audigy 2, which is not the coolest when gaming), and my RAID controller. Although the temperature doesn't really exceed the max values, the core still becomes pretty hot - a bit too hot for me:

While the first two values are normal as GPU temperatures go, the last one is way high. At first sight, I believe this to be the result of how hard the card has to work, in combination with the load of the sound processor. Tomb Raider Legend demands a bit out of the sound processing, so when that card gets hotter, the air the cool block uses, gets hotter too.

For now, I'm keeping the layout as is. Once the summer is returning, I'll see if I can't reorganise the cards a bit, and perhaps put the coolant block above the videocard itself (as there's a bit more room there); of course, if it's possible... 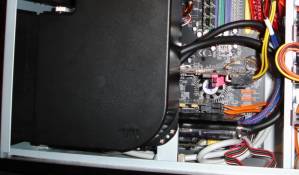