Acquired a new appliance from Mini-ITX, which is to replace my current WRT54GL (flashed with OpenWRT White Russian).

Specs of the thing are: 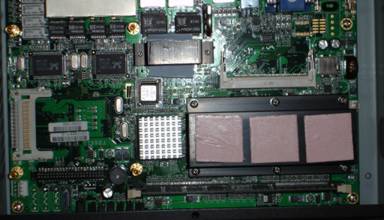 Because of the fact it's CF, I've tweaked the initramfs image of Debian so it uses overlaying for /var and /etc (using aufs) in RAMDISK, and mounting / as read-only. This allows me to save the flash, make changes as much as I want (if I screw up, I simply have to reboot). And if I do want to make changes, I only need to remount the partitions as read-write.
Additionally, the changes in the initrd are done with simple scripts in /usr/share/initramfs-tools, and thus, upgrading to newer kernels will automatically trigger a rebuild of the initramfs image and thus, includes the custom scripts.