Probably one of the most well-known series in the anime world, NGE was the inspiration for many other anime series. An apparent simple story will unveil so much more.
A thouroughly deviced story, along with comedy, in-depth characters, and fairly mech action made this anime one of the most discussed ever.

2015 AD. The world as we know it, no longer exists. About 15 years ago, earth was struck by a giant meteor and caused Second Impact, wiping out more than half of the world population. Those that survived, started on rebuilding the world.

In Tokyo, an agency called NERV was created, to fend off possible attacks from huge, apparently alien lifeforms, called Angels. This is done with huge robot-like creatures, called Evas, doing hand to hand combat, which seems to be the only effective way to deal with them.
About 15 years after the first confrontation, the Angels have returned to Tokyo...

Two separate events, with no apparent connection, have more in common than would seem.
In the middle of all this is the main character Shinji Ikari. Called to Tokyo by his father, Gendo Ikari, director of NERV, he is being recruited to pilot one of the Evas to defend Tokyo. Only he, and other select few 14-year old have the ability to interact with the Evas, and thus the hope rests on his shoulders. Although it's not what he wants to do, he pilots the Eva, causing great mental pains upon him. Being torn between the duty of saving mankind and his own personal problems, he has to look deep in his inner self to find the strength and courage to follow through, or lose everything. 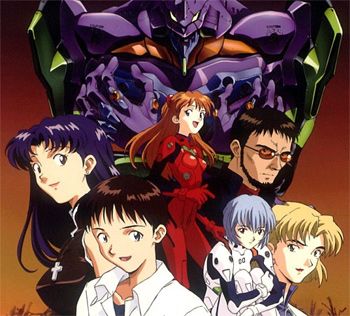 Nothing is what it seems

The story seems to start off simple enough: Angels, huge monsters have returned to attack humankind, and its up to the agency NERV to stop them. For that, they've built huge robots to engage the Angels in hand to hand combat. The robots, called Evas, can only be piloted by 14-year old children with certain specific mental capabilities. Shinji Ikari, the son of Gendo Ikari, director of NERV, seems to be one of them: thought to be called by his father to live with him, he soon realizes he's just another pawn; used by his father to his own ends.
As the story continues, the deeper plot and meaning of NERV comes clear, bit by bit.

The deep end of the mind

While the plot progress is an important factor of the series, the trouble which each of the individuals are facing with themselves and each other, seem to be more important. None of the main characters are one-dimensional: Shinji, a nice kid, struggles with the troubles of being a loner and not liking it much: he needs people around him, but they bring nothing but pain to him, and hates himself and his father, while there are in fact certain fundamental similiarities between them.
Rei is a bit of an enigma, but there's more to her than meets the eye. Asuka is the loud, overconfident, and sometimes selfish girl, but is smarter than one would think. Misato is a very closed person, but tries to live her life to the fullest. Ritsuko seems the pefect intelligent career woman at first, but has her problems as well. Gendo, Shinji's father is the cold, focused, down-to-earth commander of the facility, and seems not to have any shred of morality, other than using whatever means necessary to achieve his goals, even if this means sacrifizing his son, at first at least; the continuation shows there's more to that too. You can clearly follow the growth of each of these individuals's personalities as the story develops.

The first half of the series can be considered as semi-light fare: it's enjoyable, easy on the eyes, ears and mind. Regular hints and references are dropped on ocassion, and raises various questions, which are not always answered right away (which is a good thing in my opinion). Questions that do get answered, are usually only partially answered, and often raise more questions.
Luckily, there's the other half of the series, where the story grows further, and the pieces of the puzzle that is Shinseiki Evangelion start to fit. One by one the masks drop, and the veil drops, and the true meaning of it all becomes more clear.