One of the many anticipated games of this year, is Bioshock. It is described by its creators as new and unique experience in its genre.
It's set at the bottom of the ocean where the only way to survive is to use everything at your disposal, including genetic alteration to make your own body into a deadly weapon.

Mid-atlantic, 1960, the airliner you're on crashes into icy waters. By luck, you managed to survive the crash, and among the wreckage you see a towering light house. Inside, you discover a rusty bathysphere, descending into Rapture, a city, built by a man with a vision, as a refuge for scientists, artists and industrialists from the limited and narrowminded ethics of the upper world.
However, when arriving down there, it quickly becomes apparent, that the idealistic world represented by the city, no longer exists: dead bodies litter the floors, powerful guardians roam the corridors, and mad genetically altered citizens are out for blood... 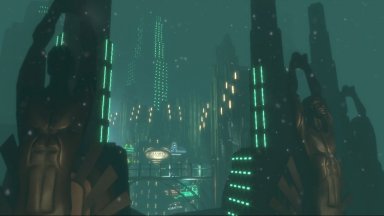 Pretty darn realistic water: that's the first thing that springs to mind after playing this game. That, and the fact that it's been a while since I've last enjoyed an FPS this much.
The water is probably indeed one of the most realistic I've seen so far. Unlike other waters, this bit seems to be more than just a simple animated texture with neat PixelShader stuff. It actually seems to have mass and buoyance. The only missing thing is when you move in the water. That bit is still a plain flat texture, and it's a bit of a miss as the rest of the water interacts wonderfully with the world.

As for the game itself, Bioshock is fun and addictive. Also, while it has a fairly original gameplay, I couldn't help but noticing various items in the game that seemed a bit familiar before: the Heroes like abilities, the sense of feeling from Lost - not only the aircrash (which looked a lot like the crash scene from the movie Cast Away, but also the ambience and some of the locations (like the hatch in Lost) - and probably some other things from some movie or TV show.
On the other hand, even so, I really don't mind: the developers managed to create a very healthy mix of all the elements, and all of them combined, create a very new experience in FPS's. 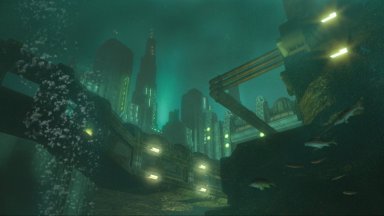 One thing I'm curious about is the goal of the developers with the game: if Bioshock is supposed to be a horror-game, then I'm afraid it misses its effect, at least on me. Perhaps it's because I've played Doom 3 and Quake 4 quite a lot, but it doesn't really put the fear in me. While the ambience could often put the scare in someone, I'm more in awe of the neat gameplay, and the whole setting, along with the weapons and so on, makes me rather believe the game to have a tad of sarcasm about it. It is a serious game, and there are some pretty gruesome stuff in there, but I guess that the many things to do in the game make it all less fearsome.
And on that note, that's another way to describe the game: there is a whole lot to be done: the game never bores. There are few bits in the game (the one thing springing to mind right now is the part with the beehives) which are a bit annoying, but for the better part of the game, it's fun, challenging, and so difficult to choose from the arsenal of weaponry to defend yourself (or attack your enemies - well that's just semantics). 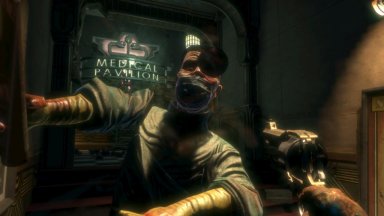 So, let's see what we've got here: we have the turrets and security cams. From a menace to yourself, they can be hacked (in a fairly original way, as well) to wreak havok on your enemies. And then there are the plasmids, which are in fact genetical cocktails, and - here comes the Heroes part - giving you a variety of neat abilities, like setting things on fire, telekinesis, freeze things, among other things. Next up are the weapons, ranging from a pistol, tommygun, and shotgun, to the more advanced weapons, like a RPG launcher, a chemical thrower, and even a crossbow. And then there's also the wee bit of little sisters and big daddies, but I'm gonna let you figure that part out...
Even the hacking, which can be a bit repetitive when you have to do it many times, proves to be quite challenging at times. 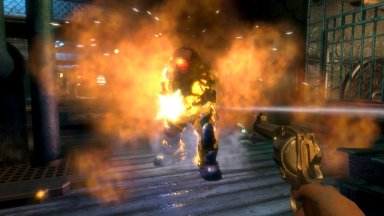 If you're only just a wee bit fan of FPS, this one should not miss out in your game collection. Aside from the pretty graphics, it has a great story, and moreover, the game does not feel repetitive, and never gets boring. What else is there to say? Really, I wouldn't want to rob you from exploring the game... ;-)
Some note about the score about stability though, I did have some intermediate crashes with certain parts of the game, and oddly, there doesn't seem to be way to patch the game, as this patching occurs during the installation of the game (correct me if I'm wrong here, though).

The game uses an online activation system. Similar to activating your Windows installation, you're asked to enter your serial number, and activate the game during the installation. As a consequence, if you're planning on uninstalling the game, it is highly recommended to revoke your activation key:

Screenshots downloaded from Cult of Rapture.