Lara Croft is once again back, and better before.
After the gloomy story of TRAOD (aka TR6), she returns to a more classic setting and content, while renewing the gameplay.

At the age of 9, Lara Croft survived a plane crash in the Himalayas. Unfortunately, her mother did not. On her own, Lara managed a 10-day hike from the crash site to Kathmandu.
The rest of her childhood, she stayed under the care of her father Richard Croft, count of Abbingdon and archeologist. When Lara was 18, her father died, leaving all of his possesions to her. She became countess of Abbingdon. By then, she performed 16 archeologic discoveries of international importance.

On her latest quest, she finds out about certain artefacts, which she has seen before, with her mother in the Himalayas. Set out on a quest to find out more about her mother's death, she has to endure ancient traps and puzzles, and old friends to get to it. A quest that will lead her around the world. 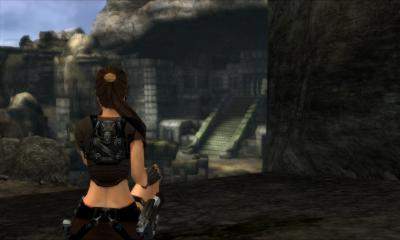 As I am quite the Tomb Raider fan, I was looking forward to this next episode. While the graphics and gameplay of the previous chapter (TRAOD) were cunning, I thought less of the story. Moreover, the length of the game was a bit disappointing. I read that they were going back to the basics of the classic tomb raider, which I found very much to my liking; and after viewing several screenshots on their website, I was pretty much convinced that the next chapter would wipe out any shortcomings of TRAOD. Yet, I was a bit sceptic about it, because well, TRAOD was supposed to be very renewing as well (to a degree, it was, but that's not for this review to discuss), especially because of the vast presence of bugs in the first (unpatched) releases.

Excalibur, King Arthur and the Round Table

That's what pretty much sums it up. Only, with a more exotic type of things. If you were to read the story, there would be a lot of similarities to TRAOD: cities and underground dungeons, period. Luckily, CD (Crystal Dynamics, or was it Core Design ?!) learned from the mistakes of TRAOD, and created settings of a more exotic kind: more real ancient temples, more outdoor, and less cities; me likes it already.
After playing the game, my expectations on that part were mostly satisfied: the more exotic settings of Bolivia, Peru, Ghana were a pleasantly alternated by more gloomy settings of Kazakhstan and England, and of course, there were the barren cold mountains of Nepal. Perhaps I would've liked even more outdoor scenes, but I guess it matches around 50%, which is quite enough. In anyway, the scenery was exactly what to expect from a Tomb Raider game. Whereas the attempts to create catacombs were fairly good in the past, considering the limitations of the game engine back then, they outdid themselves this time: the visual appeal is incredible. But don't believe my words for it: check out the gallery to see for yourself.

A new venture is now the Croft Manor: an extra level you can visit. In the past, the manor was mainly used as a training (and tutorial) ground. This time it can still serve as a training ground, but moreover, it's now a house packed with rewards for you to find. You'll have to be smart, witty and very acrobatic to find them all.

A thing about those rewards: whereas in the past, the secrets were either more ammo and stuff to help you finish the game, or the fact that you've found a lot of them, it didn't really provide you with much. This time, they've changed that fact as well. The more rewards you find, the more extra content you will get: location concepts, extra outfits for Lara, 3D models, bios of characters, and more of this will await those that find those rewards. This system encourages you to make the extra effort. The more you find, the more you get. 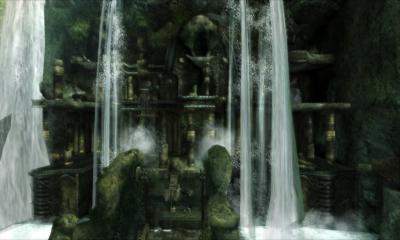 As for the gameplay, well that changed quite a bit really. While all past chapters were playable with just a gamepad (I never used a keyboard), this time, you're better off using the keyboard, and well yes, the mouse of course. While the basic directional pad moved around the camera and Lara, it has been split up: camera work is now done entirely with the mouse (or automatically, if you do decide to leave the mouse and/or use a gamepad). This includes aiming and such. Also, you now have to lock onto enemies, although this goes pretty much all by itself.
It's all a bit odd, especially if you're used to the old way of gameplay, but it has its advantages: rather than irritatingly losing focus of your targets, you now control the camera yourself (which goes automatically when shooting someone), so that's a big improvement. Unfortunately, in serious tight action scenes (like with bosses or when there's a bunch of thugs trying to shoot you), the camera does not always react very correctly. This is in particular the case when you get knocked and such: the camera doesn't always follow your mouse's lead. 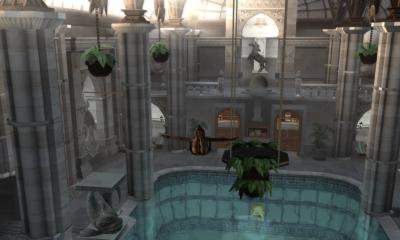 Goodies, gadgets, and a couple of new moves

Like all, Lara has evolved as well, and no longer relies on just herself and her pair of pistols. With a pair of friendly chaps in her ear - no not literally, by comms of course - to help you out, and a whole new batch of goodies: the RAD binoculars, which helps you to look around, but also to solve puzzles, the PDA, to jot down mission specs and to keep track of rewards you've managed to find and which ones are left. A very handy tool is the magnetic grapple, a 25ft wire with a magnetic grapple that can be activated or deactivated at the base. This thingy will not only allow you to pull and push various objects, you can also use it on several occassions to save your life and to get across various large deep pits and deadly traps.
These are all welcome additions, and add more fun and variety to the game.

Lara also packs a few new moves: jumping from ledge to ledge, swinging around bars, and more of this, makes the game more action packed, fun and fast paced.
And then of course, a certain about of vehicles you can utilize... Er well, that's over-exaggerated: there's just the bike you can use, on 2 locations, with pretty much the same content, only a different setting. Oh yeah, and how could I forget the forklift: a very short usage...

It's a bit unfortunate because previous chapters had more vehicles and more and longer use of them. 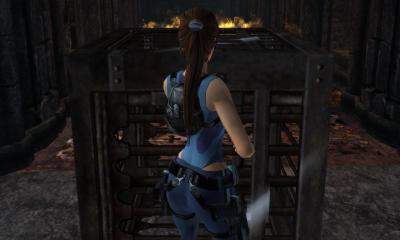 Well, all in all, the game is terrific: the graphics and sound is wonderful, the setting is even better, the new gameplay is a welcome addition, and the reward system is excellently thought of. Despite the less positive aspects I told you of earlier, it's a game that should not be missed, especially not if you're a Tomb Raider fan.

The only thing, which is happening to a lot of games of late, is the fact that's it's pretty short. Of course, it's pretty impossible to create long lasting games these days, with all the neat and nifty graphics, but the Tomb Raider's had more puzzles and larger levels. It's a bit disappointing when the game is quickly finished. On top of that, the puzzles that are in the game, aren't all that difficult. Okay, I have to admit that some of the things you have to do to get rewards are pretty far-fetched, but still, the puzzles used to be a lot harder and more difficult to solve. From that angle, the game is a bit too easy.