While at the surface, it resembles NGE a bit, the comparison stops at the looks of two of the main characters: set in a near future Tokyo, where crime is high, and the population suffers from threads of violence and oppression, not only by the various yakuza syndicates, but also the new law enforcement, whose totalitary reign scares all. However, there are changes at hand, in the form of four teenage girls. At first, hired guns for a respectable syndicate, their allegiance changes when they uncover a secret conspiracy, going all the way up to law enforcement...
A fast-paced, mecha action anime, with cute main characters: what more do you want?

Mid 21st century. Tokyo has become a dangerous place to live: crime has risen to extreme levels, possession of illegal firearms has increased, various yakuza syndicates compete for domination, and more and more people end up on the streets, robbing people for money. While the new gun law requires a permit, more and more citizens see this as a way to take matters into their own hands.
Because of this, a new law enforcement division, by the name of RAPT has been founded. While apprehension rates have risen, arrest rates are dropping, meaning more and more criminals don't survive a confrontation. Moreover, citizens are under a constant fear of violence, and oppression.
Sei, Jo, Meg and Amy, four teenage girls have united as an elite task force and work as hired guns for a syndicate, when they stumble upon something much more sinister, a conspiracy between syndicates, as well as law enforcement, and eventually leaving them as targets too... 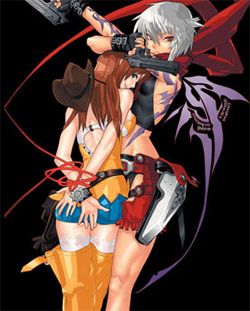 My understanding of the show

I got my attention on this show because of the apparent resemblance between two of the main characters of BT and of NGE (Neon Genesis Evangelion), being that Meg (BT) and Asuka (NGE), and Jo (BT) and Ayanami Rei (NGE) look a lot like each other (check out the screenshots in the gallery to see). However, the resemblance between the two series stop there.
The setting takes place in a totally chaotic Tokyo, not far from here, where crime is high tide, and the only way to stop it, is a totalitary reign of terror upon the population by law enforcement, in the form of RAPT. Having numerous cybots (large, high armored robots, armed to the teeth, controlled by a pilot), and troops, their wrath reigns down on all who even think about crossing the boundaries of law.
In all of this are our four heroes, four teenage girls, each with their specific skills. While they work as mercenaries for a respectable syndicate, things take a turn for the worse when they happen to stumble upon a secret conspiracy. The deeper they dig, the more dirt they find out about RAPT, and more they become targets themselves.

As for my opinion...

Well, there's not much to say other than me liking BT... a lot. Aside of the cute characters (naturally ;-)), the most important reason is probably the realism of the whole thing. Okay, there are no monsters and cybots (yet), but a city like that (be it Tokyo, or somewhere else) is not very farfetched. As an added realism, is the fact that our heroes here are not flawless: they all have their specific little character quirks, making them more human, and makes one feel more related to it. And if that doesn't work, there's still the fast paced action, abundantly present, alternated by conversations and situation where you find out more about the characters and why something is what it is.
What I also liked is the fact that you get quite satisfied at the end. The first episodes raise a lot of questions, and the most important ones do get answered once the show is over. In particular, I liked the fact that there were flashbacks to the past, where you learned about how the group was formed in the first place. And in the end, it all seem to fit, one way or another.
A few questions still remain, which is a good thing, as it leaves an open ending, and a possible pick up for a future show (if they wanted to make one).