During the installation of Azure AD Connect, the registration of the Azure AD Connect Health for Sync-agent may fail. When this happens, you can manually register the agent by running this Powershell cmdlet:

You need the credentials of an O365 account with Global Admin rights. 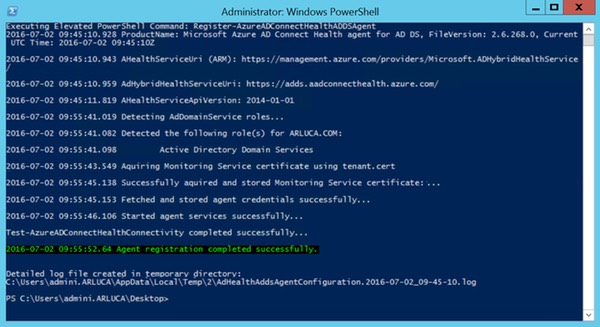 Office 365 AD Sync: force a full password re-sync
edited by on October 19th 2015, at 12:59
When running an Office 365 with Active Directory synchronisation from your on-premise domain, you may encounter the issue where passwords for one, some or all accounts do not sync anymore. This can particularly happen if changes were made to the configuration of the AD sync (such as change in OUs, change of rules, etc.).

If you're using Azure Active Directory Sync tool (old method) for synchronisation, on the server running AD sync, start Powershell, then run these:

Change primary UPN-suffix (User Principal Name) quickly through Powershell
edited by on March 18th 2015, at 13:38
When implementing AD/Dirsync to synchronize your on-premise AD with Office365, you may have to change the UPN-suffix to match the (e-mail) domain name used in your Office365 tenant. Most often, the local UPN-suffix would be something like domain.local, and would then have to be changed to domain.com. With a lot of users, it can quickly become tedious to change this manually. Along came Powershell...

The attached script is an easy way to quickly change the UPN-suffix for all users in a particular OU. Simply adjust the parameters to match your configuration, and let it run. Note that the script runs recursively, so be careful when running this on a top-level OU, as it will cascade through a  ...

Quote
« Debating Windows vs. Linux vs. Mac is pointless: they all have their merits and flaws, and it ultimately comes to down to personal preference. »
Me